Latinos in Iowa, overlooked as a political force for years in the state that kicks off the U.S. presidential race, have been getting unprecedented attention in a too-close-to-call Democratic White House nominating fight.

The predominantly white state has seen the Hispanic share of its population more than double to 6.2% since 2000, making it Iowa’s biggest minority group and a crucial voting bloc that could spell the difference in Monday's state caucuses and in the November election.

Left: A Pioneer sign stands in a field, on a farm.
Right: An eagle model decoration, sits on the front yard of a house.

Salazar said the Democratic Party has sometimes taken the Hispanic community for granted.

"I'll be the first to admit that we have not done as much as we need to as a party to organize and emphasize the Latino vote," said Troy Price, chairman of the Iowa Democratic Party, who said the party was trying to bolster its Hispanic appeal with new staff and programs.

With the Hispanic population expected to more than double again by 2050, according to the State Data Center of Iowa, Salazar said the community was trying to build a tradition of civic engagement.

"When people think about rural Iowa they think of white farmers, but many of these communities will keep becoming more diverse and more Latino," Salazar said. 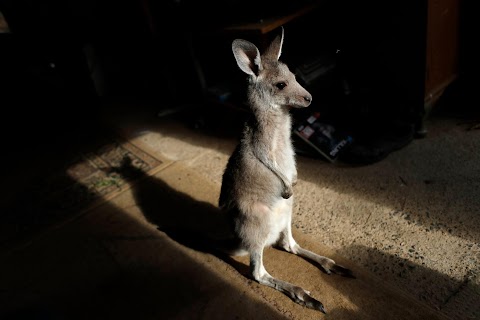 At home with couple who saved baby kangaroos from the fires