Many people’s first instinct when they see a rat in the street is to turn around and run, but members of the Ryders Alley Trencher-fed Society (R.A.T.S.) actively seek out the rodents.

The group of dog enthusiasts venture out on night-time excursions in New York City to allow their pets to do what they do best: hunt and kill vermin.

"The dogs are not given treats after a catch. Reynolds says their reward is 'the simple privilege of hunting itself, it’s what they want to do.'"

On a hot and humid night in late July on New York City’s lower East side, I find Richard Reynolds and a small group of dog enthusiasts standing beneath the pale-yellow glow of the street lights. The sound of dogs barking emanates from inside cars parked near the apartment buildings.

This is the staging ground for a group of enthusiasts named The Ryders Alley Trencher-fed Society, or R.A.T.S. The name comes from a notoriously rat-infested street in Lower Manhattan, where this group and their dogs (mostly terriers) have one mission: to hunt down and kill rats, something I was told they have been doing for about 15 years.

A few more members of the group emerge from the shadows with their dogs. As they prepare for the hunt, Reynolds, a business consultant from New Jersey and the leader of the pack, tells me of his love for dogs. He owns at least seven, has bred terriers, judges dog shows, and is involved in just about all aspects of raising and training dogs for hunting.

“All of the folks you see here are dog nuts,” he says.

New York City is notorious for its huge rat population and some say there are more rats here than people. In 2014, the city budgeted $611,000 to target the problem. R.A.T.S., however, is not affiliated with the city or any official agency.

“They cooperate with us and we with them and over the years we have had a mostly cordial relationship, but we are not working for anyone here except the dogs,” Reynolds says.

“This is all about the dogs and letting them do what they were born to do: hunt.”

It’s time to get started. The group knows what they’re doing and the local police are welcoming towards them. R.A.T.S. hunts as a team. Tonight, there is a Dachshund, a Feist, two Border Terriers and a Bedlington Terrier named Catcher, who belongs to Reynolds.

We head out through a small park, the dogs sniffing eagerly while some local residents enjoying the warm night ask if we have killed any rats yet. They are used to seeing the rodents and are excited that the group is here to kill some.

As we approach a large pile of trash bags on a dark corner, the team gets to work. “Lets not screw this up,” Reynolds yells to the others.

The larger dogs are led in to root through the bags of trash and flush out the rats so that the smaller, faster Border Terriers can chase them down to make the kill.

Despite the camera’s ability to shoot in extremely low light, the dogs move so fast I know I will need to stop the action with the light of the flash. It results in what I call “low-success-rate photography”. Many of the pictures are a blur of motion and out-of-focus objects, but between the failures there are successes.

Having made no kills in several locations, we end up at what one member of the group calls “the mother ship”, an open dumpster behind a police station where many rat kills have been made in the past.

When the dogs pick up the scent of a rat they go into a fast frenzy. One group member places cardboard over a sewer drain to keep any rats from escaping too easily beneath the street. A feisty border terrier named Merlin makes the first kill. In the blink of an eye, he chases down a rat scurrying for cover after the others have flushed him out of a trash pile. With a quick shake of his head the vermin is dead, his neck broken.

The dogs don’t eat the rats. In fact, after one is killed they quickly lose interest and head back to hunt for more. The dogs are not given treats after a catch. Reynolds says their reward is “the simple privilege of hunting itself, it’s what they want to do.”

Just after midnight, a few more rats are chased down and killed in the cement courtyard of an apartment building and the group decides to call it a night. Some members are heading back to New Jersey, another simply walks off into the night.

The tally of four killed rats is “not a great night” according to Judy T as she sits by her dog, Merlin, and a couple of dead rats he has killed. The dogs are packed back into the cars and goodbyes are exchanged as the group members return to their everyday lives.

I leave thinking New York’s rat-hunting dogs are no doubt satisfied with the night. After all, it’s what they were born to do. 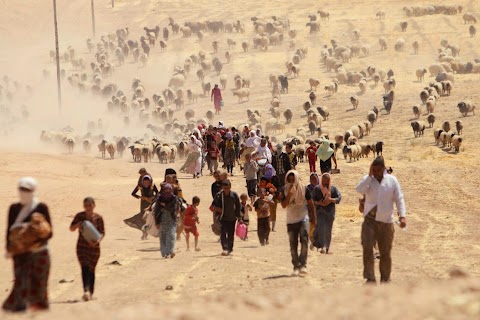