…Is it a plane? Is it Superman? Tough question: in this case, it is a little bit of both.

This “Man of Steel" is actually small, radio-controlled plane made of foam and electronic parts that owes its flying ability to lithium batteries, rather than superhuman powers.

“Next up was a test flight for Ms. Emerson, a bit of a cross between an angel and a Vegas blackjack dealer.”

As technology costs drop, allowing individual inventors to become freer to pursue their dreams, create their ideas, and start up new businesses, the world will become a more fascinating place to live.

I first made contact with Otto Dieffenbach in early 2013, after a Youtube video of him flying a cardboard-type plane along the California coastline went viral. We chatted and he said he was working on something even better and would drop me an email when he was ready to show it off.

So, six months later when he got in touch I was curious to see what he had been up to. In this case, it was a much more refined and well designed “flying people” plane. I’m still really not sure what to call them.

Otto was going to be testing some prototypes and I was invited to come along with my cameras. It was a bit of an early start, considering the past two months I had been working late helping edit the NBA and NHL playoffs and I was given very specific directions to a somewhat strange location: meet by some dumpsters off a side road in back of a building.

I met up with Otto and his business partner Ed, and I got my first look at some prototype “flying people”. We travelled down a back trail to an open vista on a canyon, where a bank of fog was hanging and the sun was working at breaking through.

His prototype of Superman, made from foam and electronic parts, was the first to fly. The machine was radio-controlled and ran on lithium batteries placed, in this case, inside superman’s head.

Ed lifted Superman and the two of them went over a pre-flight checklist, not unlike the Marine pilots chatting in my headset on a recent Osprey flight I took with the U.S. military. But not as complicated.

Ed held Superman into a slight off-shore wind and Otto moved his fingers around a controller in a manner that looked a lot like my son playing his Xbox. Superman was launched and it looked so realistic with the naked eye; my senses did a total double take.

Superman was on a timer and he had a little over five minutes of power as Otto flew him in figure eights and all sorts of other flight lines. I banged away on my shutter button and recorded the moments.

Next up was a test flight for Ms. Emerson, a bit of a cross between an angel and a Vegas blackjack dealer. Then they tested a flying figure of Ironman. They all flew, albeit differently. Faster, slower, longer, it was a good test day for Otto as it ended with everyone in one piece and no long retrievals of his “people.”

So, Otto and Ed now had something that caught the public’s attention and in the world we live in, that is 80 percent of the battle. How they work that into their business model, which for now is going to focus on promotional events, will be interesting to see.

I came away with a nice selection of images that went out to clients and are popping up on screens and newspapers all around the world.

It’s a great idea that I’m sure you will soon be seeing in the sky at an event or in a city near you. And it’s great to meet two guys who are so involved in what they are doing without being totally focused on the potential monetary success. I can’t wait for you all to see this for yourselves. 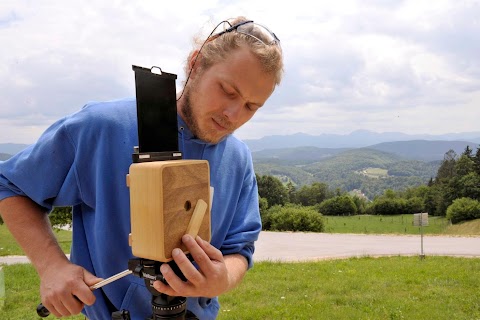